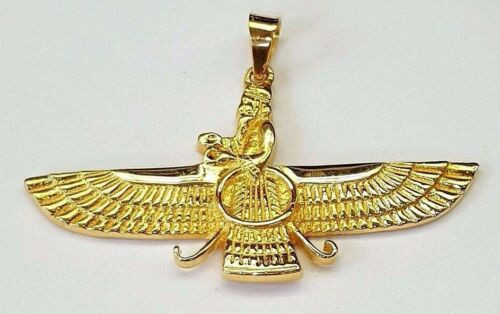 New without tags
Beautiful 18k solid yellow gold highly detailed Farvahar Zoroastrian Achaemenid 2500 B.C. pendant.
Weight approx: 5.3 grams
Dimension approximately : 50×25 mm(2"×1") without the bail.
Please note that the weight up to 0.3 gram might be different because of scale accuracy differences and mass machinery production.
Two descriptive pictures added to give you a better knowledge of what the sign means.
[FARAVAHAR - WINGED SYMBOL OF ZOROASTRIANISM
The winged disc with a man's upper body that is commonly used as a symbol of the Zoroastrian faith, has a long and splendid history in the art and culture of the Middle East. Its symbolism and philosophical meaning is an ancient heritage that extends through three millennia to modern times.
Iranian Symbols
A.The word Faravahar is made up of two parts: “Fara” meaning forward of ahead, and “vahar” meaning pulling, so Farvahar literally means “forward-pulling force”. In ancient Iranian culture, the concept of Farvahar was considered as the invaluable component of human existence because it is an attribute of Ahura mazda’s infinite entity.
It is incorporated in human at birth to guide and lead toward perfection, and after death it unites with its origin or Ahura Mazda as pure and perfect as it was. The emblem of Farvahar is a winged old sage symbolizing Mazdayasna thoughts. The symbol dates back to thousands of years ago. It is made up the following parts:
1.Head 2.Hands 3.Wings 4.Central circle 5.Feathered tail 6.Two hanging cully threads
1. Head
The figure inside is that of an old man representing wisdom of old age that reminds us the Farvahar of the elderly can be a better guide, and that we should consult experienced and wise people.
2. Hands
One of the hands points upwards, telling us that we shoul always be in only one direction (lf Ahura Mazda). The other hand holds a small ring, the ring of promise. This shows respect for promise. In today’s world, we see it in the form of wedding rings signifying the promise between two humans.
3. Wings
The wings are spread apart signifying the ascent of the soul or upward progress of human. Each wing is in three major segments, representing Good Thoughts, Good Words, and Good Deeds. This suggests progress through the triple principle.
4. Central circle
A circle is a line that has no beginning and no end. The central circle in the Farvahar symbolizes the cycle of life and the eternity of the universe. It tells us that results of man’s actions return to him in this world, and in the other world the soul of the righteous one will enjoy the reward (joins the Domain of Song, and enjoys peace of mind); on the other hand, the soul of the wicked one will fact the punishment (darkness and sadness).
5. Feathered tail
The feathered tail below is also in three parts. It represents the opposite of the wings namely, Bad Thoughts, Bad Words, and Bad Deeds. It indicates the fact that we should always drop bad choices down and avoid them.
6. Two hanging curly threads
These two threads signify Spenta Mainyu (Good Mind) and Angra Mainnyu (Evil and Angry Mind). These may occur in human mind any time, and every Zoroastrian is responsible for embracing Spenta Mainyu and discarding Angra Mainyu to think of the
Good.]
Please review the description, item condition and pictures carefully before shopping, Thank you!