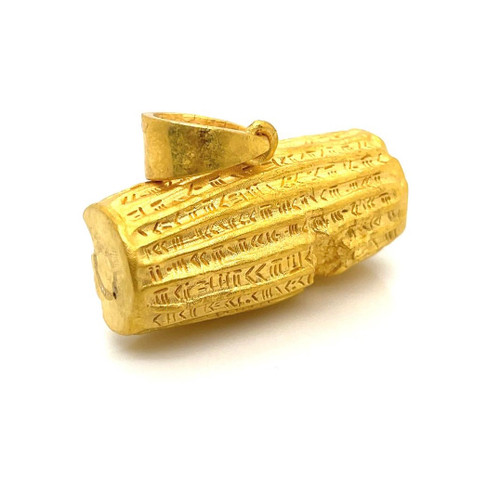 Please note that the weight and the color might be different due to hand-made production.

Please review the description, item condition and pictures carefully before shopping, Thank you!

The Pillar of Cyrus (Ostovane-ye-Kurosh) is an ancient clay pillar on which is written a statement in the name of the Achaemenid king of Persia, Cyrus the Great. The United Nations said the monument was an "ancient human rights bill".

It was created and used as a foundation deposit during the Persian conquest of Babylon in 539 BC. AD, when the New Babylonian Empire was invaded by Cyrus and incorporated into his Persian Empire.

The cylinder is the first attempt we know to run a society, a state with different nationalities and beliefs. Therefore, it contains many provisions concerning the welfare of the people, prohibiting slavery and freedom of religion.

Cyrus' cylinder is one of the most famous surviving icons of antiquity. The column he was excavated in Babylon in 1879 and was inscribed in Babylonian cuneiform by order of the Persian king Cyrus the Great, who conquered Babylon in 539 BC. had conquered. It shows the establishment of Persian rule and records how Cyrus restored the temple and allowed the exiled to return home. The Jews are believed to have returned to Jerusalem at this time and were building a second temple, as seen in It reflects the innovations brought about by Persian rule in the 19th century.

A unique aspect of the exhibition at the Metropolitan Museum of Art is the exhibition in the Gallery of Ancient Near Eastern Art, where objects from the permanent collection, including the famous Babylonian Lion, provide a stunning backdrop. Also on display are artworks from the Metropolitan's Department of Painting and Prints and the European Department of Sculpture and Decorative Arts, celebrating Cyrus and his legacy as a liberal and enlightened ruler.

Like many ancient rulers, the Persian conqueror Cyrus the Great (c. 590-529 BC), also known as Cyrus II, came from an aristocratic background. After the death of his father Cambyses his I, Cyrus ruled the Achaemenid dynasty and expanded his ancestral realm into a mighty empire. He triumphed not only by conquest, but also by his unique tolerance and mercy towards those he defeated.

A brilliant military strategist, Cyrus defeated the king of Media and incorporated all the Iranian tribes. Their skill in combat on horseback gave his army great mobility. His victory over Lydia in Asia Minor near the Aegean Sea filled his treasury with the vast wealth of the land.

A man of mercy

The benevolent nature of Cyrus' reign took many forms. He appeased them by including the once powerful Medes into the government. He adopted the customs of clothing and ornaments from the Elamites. Throughout the conquered lands he brought back the images of the gods conquered in battle and hoarded in Babylon. And in Babylon itself, he publicly worshiped the city's revered Marduk. Cyrus' most famous act of mercy was the release of the Jewish prisoners who were forcibly exiled to Babylon by Nebuchadnezzar II. Cyrus allowed them to return to the Promised Land. The Jews hailed the Persian emperor in the Bible as the Messiah who would enable God to empower other kingdoms to return to Jerusalem and rebuild the temple.

Human Rights and the Cyrus Cylinder

Human rights are sometimes portrayed as a 'Western' concept or invention (often vehemently by the most serious violators). This is really a misunderstanding of the centuries-old history that led to the adoption of the Universal Declaration of Human Rights in 1948. In 539 BC, the army of Cyrus the Great, the first king of ancient Persia (modern day Iran), conquered the city of Babylon. In doing so, and as he prepared to rule his new territory, he announced that the slaves would be freed, that everyone would have the right to choose their religion, and that the different races living in the city would be free. are treated equally. He recorded all this on a baked clay pillar (now known as the Cyrus Pillar and housed in the British Museum) - an ancient record widely recognized as the first human rights charter. In the world. It is translated into the six official languages ​​of the United Nations and its provisions reflect the first four articles of the Joint Declaration.

Cyrus' ideas, which played a key role in developing the notion that human rights are not limited to a single cultural tradition, would be developed by other great civilizations over the centuries to come. The Decrees of Ashoka, 33 inscriptions record the laws established by Emperor Ashoka of the Mauryan Empire between 273 and 232 BC. AD, found in present-day Bangladesh, Nepal, India and Pakistan. He is credited with promoting tolerance and understanding among religious communities, humanitarian ideals in times of war, and the right to a fair trial. Several centuries later, the Prophet Muhammad would write the Medina Charter (circa 622), which some scholars believe was the first constitution to recognize a set of basic human rights. Western countries will also play an important role, but later:

Magna Carta (1215) in England (we'll be celebrating 800 years soon), the US Constitution (1787) and the French Declaration of the Rights of Man (1789) are all widely recognized for playing an important role. important in drafting. of the Universal Declaration. This declaration will for the first time recognize a set of fundamental rights that the governments of the member states of the United Nations are obligated to guarantee to all their citizens. The international bodies, treaties and organizations tasked with implementing them, and individual states may hold each other accountable; for the first time against a widely accepted set of principles.

The yellow gold Cyrus cylinder pendent has been made by us and You can purchase it by visiting our site.